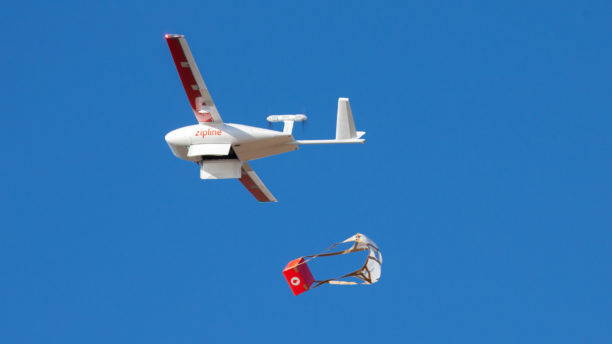 It has been a momentous week for drone delivery. Google received the first-ever Air Carrier Certificate from the Federal Aviation Administration (FAA). On Wednesday, Zipline, a San Francisco-based health-tech drone delivery company that launched in Rwanda three years ago, expanded its operations to Ghana. This makes it not only the first, but now the largest medical drone delivery service in the world.

The expansion means Zipline will deliver an additional 148 different life-saving vaccines, blood products, and medications. Working with the Ghanaian government, the service will operate 24 hours a day, seven days a week, from 4 distribution centers ? each equipped with 30 drones ? and deliver to 2,000 health facilities serving 12 million people across the West African nation. Each distribution center has the ability to make up to 500 flights per day. A doctor simply needs to send a text to a facility and requested supplies will arrive within minutes.

“Millions of people across the world”In both developed and developing countries”Die each year because they can”T get the medicine they need when they need it,” said Zipline CEO Keller Rinaudo. “That’s why Zipline is building the first logistics system on the planet to serve all people equally.”

Since launching its drone delivery service in Rwanda in October, 2016, Zipline, which builds its own UAVs, has flown over 1 million autonomous kilometers. Over 13,000 successful deliveries have been completed in Rwanda and 65% of the country’s blood supply has been delivered to patients in need outside the capital city of Kigali. Critical partners in Zipline’s efforts include UPS, who is testing out medical supply deliveries in North Carolina, Pfizer, Novartis, and the Bill & Melinda Gates Foundation.

Zipline’s operations in Ghana and Rwanda deliver to over health 2,500 facilities, and serve 22 million people, combined. They’re expected to save tens of thousands of lives over the next few years. The company also plans on expanding its operations to other countries, with areas that lack critical infrastructure to access life-saving medical supplies, including developed and developing countries across Africa, South Asia, Southeast Asia and the Americas, including the United States. Zipline is working with the state of North Carolina to test beyond line of sight flights with the FAA’s UAS Integration Pilot Program, the same program used by Wing.