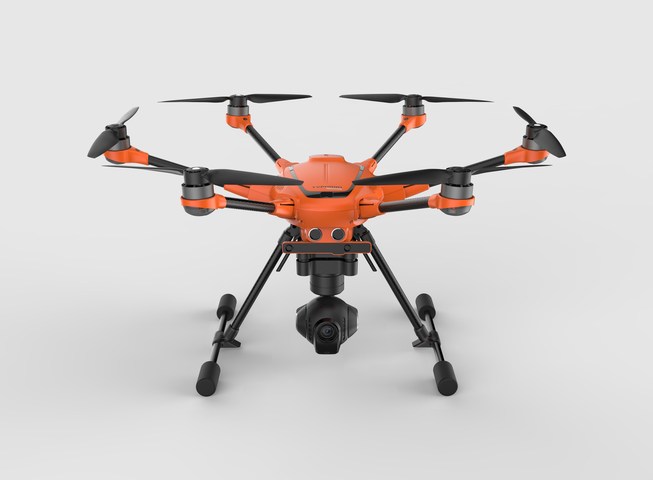 Yuneec is starting the year off with a bigger focus on its commercial drone offerings. The company announced the H520: a new six-rotor drone designed for commercial applications. The H520 is designed to fly longer and hold a greater payload while still ensuring precision and safety.

“With its suite of advanced features, the H520 is dependable, reliable and capable of fulfilling virtually any commercial need,” said Tian Yu, Group CIO and CEO of Yuneec. “Pilots can fly with confidence knowing they have an array of camera options for a variety of situations and industry-leading safety features, including intelligent obstacle navigation with Intel RealSense Technology.”

The H520 is a hazard orange color to give it high visibility, and it features a 360-degree, three-axis gimbal with retractable landing gear. It will also have three camera options: the CGO-ET dual thermal/RGB camera, the CGO-CI seven-element inspection-ready camera, and the CGO-3+. Each camera offers different capabilities depending on the situation and the operator’s mission.

The H520 will also feature an Android-based control, with a 7-inch display, an HD video downlink, and an HDMI uplink. Other features include geofencing, variable speed control, dynamic return home, and low-battery return home capabilities.

In addition, Yuneec plans to provide a software development kit that will enable developers to build applications for the H520, ranging across a variety of commercial markets.

Both the drone and the SDK are expected to be released in the second quarter of this year.