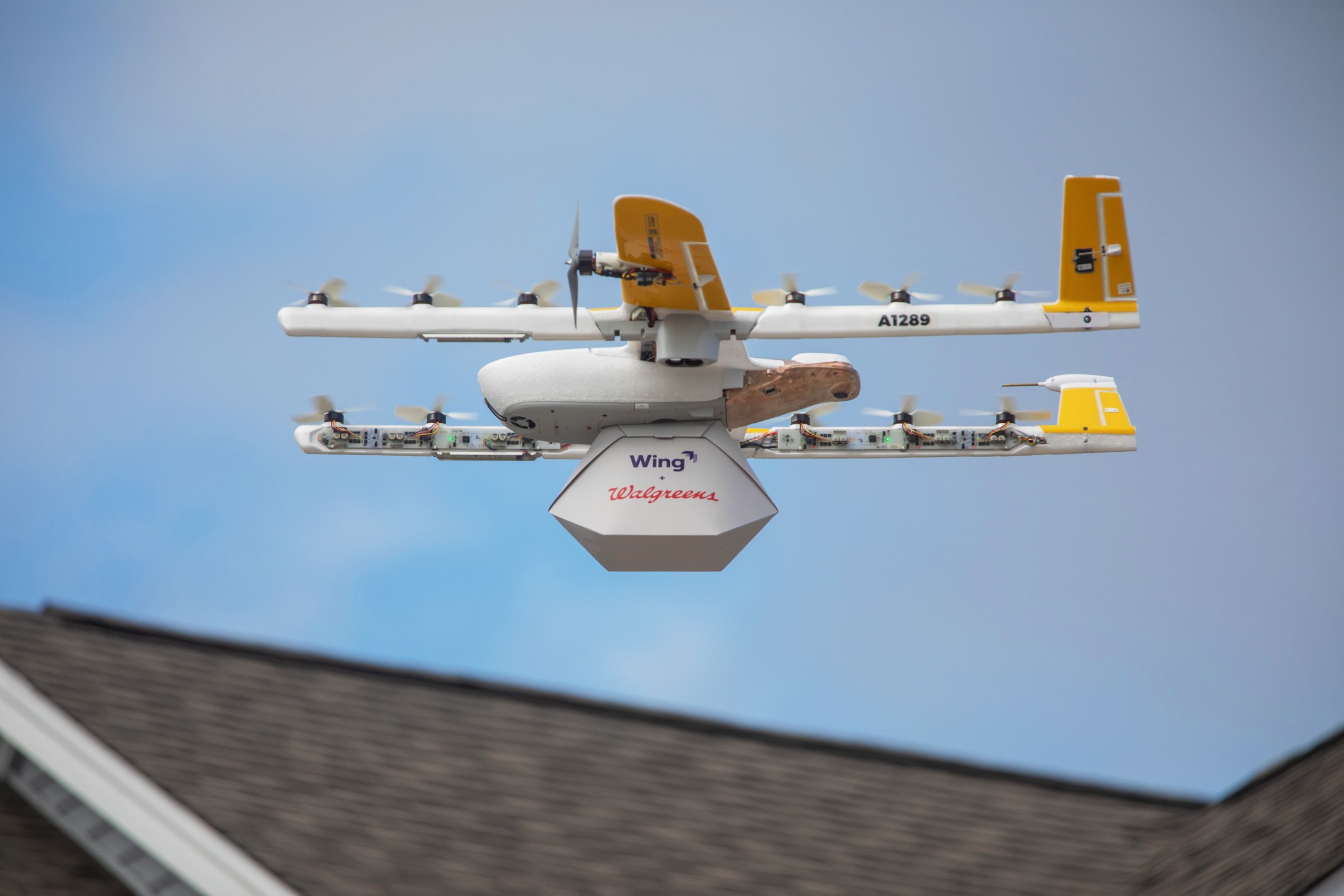 Back in April, Alphabet’s Wing received the first-ever approval for commercial delivery via drone from the Federal Aviation Administration (FAA). This past week, the subsidiary of Google’s parent company made the first commercial drone delivery flights in U.S. history. The first-of-its-kind mission delivered packages, over-the-counter medication, snacks, and gifts to residents in Christiansburg, Virginia.

Wing is establishing the footwork for the most advanced drone delivery service in the U.S. thanks to the permissions granted by the FAA. Those permissions allow multiple pilots to oversee numerous simultaneous flights making commercial deliveries to the public. Wing has partnered with Walgreens, FedEx Express, and a local Virginia-based retailer, Sugar Magnolia, to make these precedent-setting, on-demand, last-mile drone deliveries.

Customers have a few options for how they want their goods delivered. A Wing app enables you to place an order from Walgreens or Sugar Magnolia. The drone will take off within minutes to deliver the items. Another option is to receive a scheduled delivery via FedEx Express. The lightweight drone delivers directly to the home, lowering the package with in a small, designated area of the homeowner’s property before returning to Wing’s “Nest? in North Christiansburg.

Drone deliveries are especially convenient for people who are homebound due to medical issues, mobility challenges, or old age. Paul Seismeier has been married to his wife, Susie, for 50 years and tried out Wing to deliver a special birthday gift for her. Because they come from a family of medical professionals and engineers, “We’re always excited about new things,” says Paul. “It’s not always easy getting up and getting out,” says Susie. “Paul broke his leg in June. We know what it’s like to feel stuck sometimes.”

Environmental impact, and roadway congestion, is another concern for many. Michael Collver and his wife, Kelly, ordered a cough and cold pack from Walgreens along with tissues, bottled water, Tylenol, Halls cough drops, and Emergen-C. “Usually, every time you need something like Tylenol, that’s another car on the road,” said Michael. “It’s a hassle. With Wing, the kids love it, it keeps that car off the road, and it’s good for the planet too.” Kelly and Michael met as graduate students in biology, and Michael teaches at a local high school where he also coaches a competitive robotics team. “Wing is perfect. This is the professional outcome of what I”M doing with these kids.”

Anyone living in Christiansburg or the surrounding area is encouraged to visit wing.com/va to learn more about Wing’s drone delivery service.