These Two Projects from MIT are the Future of Drones 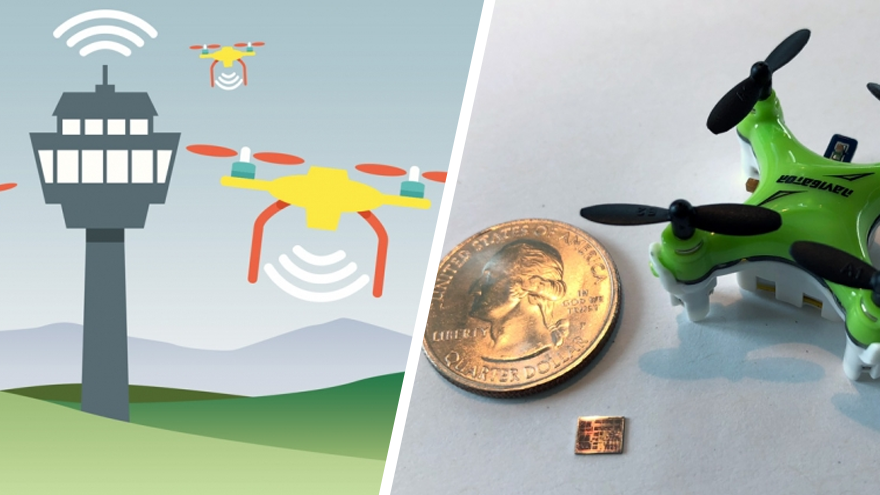 The name MIT is synonymous with boundary-pushing research, and this week two of the university’s projects announced advancements that are clearing a path for fleets of micro-drones to fly autonomously.

Last year, a team co-led by Vivienne Sze, associate professor in MIT’s Department of Electrical Engineering and Computer Science (EECS), and Sertac Karaman, the Class of 1948 Career Development Associate Professor of Aeronautics and Astronautics, built Navion, a low-power microchip designed to help drones the size of a bottlecap navigate. Now, only a little less than a year later, the team has revealed a 20-square millimeter version which can fit inside a drone the size of a fingernail.

The tiny marvel is able to process real-time camera images up to 171 frames per second while drawing on sensors to determine its position in space. The chip has been built from the ground up to be flexible and draw less than 1/5 the power of a normal drone processing unit. The design optimizes the way data flows across the chip and intelligently compresses or discards data as needed to save energy. “Any of the images we would’ve temporarily stored on the chip, we actually compressed so it required less memory,” says Sze.

One of the often overlooked issues in future visions of fully-automated skies is managing the quality and timeliness of the data being transmitted between drones and other aircraft. Environmental conditions change all the time, and drones operating on stale data will be prone to error. Also, bandwidth is at a premium, so networks currently focus on transmitting data as possible without any form of signal prioritization. A team from MIT’s Laboratory for Information and Decision Systems believes they have an answer with a system they’ve developed which can prioritize data by three variables, the nodes (drones) on the network, ranked by importance, the reliability of the signal, and the freshness of the data.

Eytan Modiano, professor of aeronautics and astronautics and a member of MIT’s Laboratory for Information and Decision Systems, explained how the system achieved an unrivaled level of efficiency. “We came up with a fundamental bound that says, you cannot possibly have a lower age of information than this value ?? no algorithm could be better than this bound ? and then we showed that our algorithm came close to that bound,” Modiano said. ‘so it’s close to optimal.”