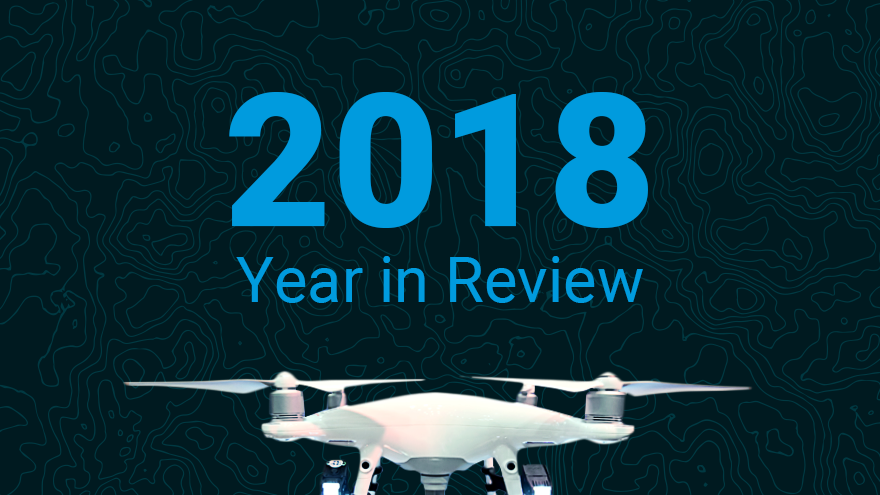 As 2019 kicks off, one thing remains certain, the drone industry will continue to innovate and thrive. In retrospect, expectations shifted within the UAV space in 2018. This wasn’t due to mounting uncertainty, but because real implementations and clearer UAS-specific regulations began replacing lofty visions of the future and regulations designed around manned aircraft. The drone industry has seen unprecedented change over the last 5 years and 2018 will go down as the year things became serious. Let’s take a look the headlines and trends that shaped the year.

Dan Elwell Stepped in as Acting Administrator of the FAA

After seeing the FAA through some of the largest changes in its history, Admin Michael P. Huerta handed the torch over to Dan Elwell who served his first official year as Acting Administrator in 2018. As the Secretary of Transportation Elaine Chao’s first pick for the job, Elwell has led the FAA through the first year of the UAS Integration Pilot Program, which seeks to bring together industry and local, state, and tribal governments in an effort to accelerate safe drone integration. Elwell is also responsible for leading the regulatory body through all the changes proposed by the landmark FAA Reauthorization Act of 2018 and the expansion of the Low Altitude Authorization and Notification Capability (LAANC).

For years, the Section 336 Protection, colloquially known as the hobbyist loophole, kneecapped the ability to draft clear regulation that applied to both commercial and consumer drone flight. The FAA Reauthorization Act of 2018 struck that exemption and stated that hobby aircraft operators will have to register their drones and pass an Aeronautical Knowledge Test. The act also tasked the FAA with establishing a remote identification standard for all drones to ensure the safety of the National Airspace System (NAS). Remote ID, new provisions for C-UAS, and new standards and rules for data collection are all spelled out in the bill as steps towards creating a unified UAS Traffic Management system (UTM). For those waiting for drone deliveries and beyond visual line-of-sight (BVLOS) flights, this piece of regulation lays the groundwork before those technologies can be safely integrated within the NAS.

DJI and Parrot Released New Drones for the Enterprise

Both drone manufactures released drones in the enterprise category this year, but most surprisingly both reconfigured small consumer-first airframes for work on industrial projects. The philosophy of bigger is better was challenged with the DJI Mavic 2 Enterprise and the Parrot Anafi Work bundle. Banking on the philosophy that the best drone is the one that is available, these smaller lightweight and foldable drones provide 4k imaging in a portable package. It’s still too early to tell whether these micro-sized models will enjoy the same level of integration that Phantom series saw, but not many analysts were expecting firms to choose consumer-grade drones back then as history proved them wrong.

Headlines Shifted from Startups and Funding to Buyouts and Partnerships

PrecisionHawk repeatedly made the news in 2018 with strategic acquisitions in growing verticals like energy and construction, totaling five for the year. Established aviation industry giants like Airbus and Boeing kept their names in print with collaborations and partnerships in every category from Airbus contributing to a Urban Air Mobility (UAM) prototype to Boeing throwing its hat in the ring with Amazon, GE and Google to develop a private UTM.

Even the NYPD, which ranks as one of the nations largest law enforcement agencies, has begun using drones. The use cases for drones in public safety are enumerable as well as are concerns from the public about potential misuse. As agencies are beginning that conversation with the public as they develop their programs, one arena that everyone agrees drones are helpful is disaster relief. Drone use during the California wildfires grew in both implementation and demand as the scale of the emergency escalated and continued throughout most of the year. Agencies have been using drones for both post-fire damage assesment and on the scene assistance. The efficacy of using drones to drop water was looked into by the Office of Aviation Services OAS), Department of the Interior (DOI).

Urban Air Mobility Has Captured the Imagination of Regulators and Researchers

Expectations for integrated UAM (flying cars) systems, range wildly from five years to decades, but a few common threads keep the concept within the realm of possibility. Lawyers and regulators have begun looking at UAM because small-UAS will help forge the regulatory vocabulary necessary to establish any realistic version of a flying car system. Both automotive and aviation companies have begun developing prototypes for UAM vehicles, with newer drone companies like eHang producing working models already. A lot of issues need to be resolved like charging, collision prevention, and noise pollution before real world working models of this technology will be seen in a city near you. For now, small-UAS are still king.

What will 2019 bring? No one knows for sure, but you can bet on more acronyms.