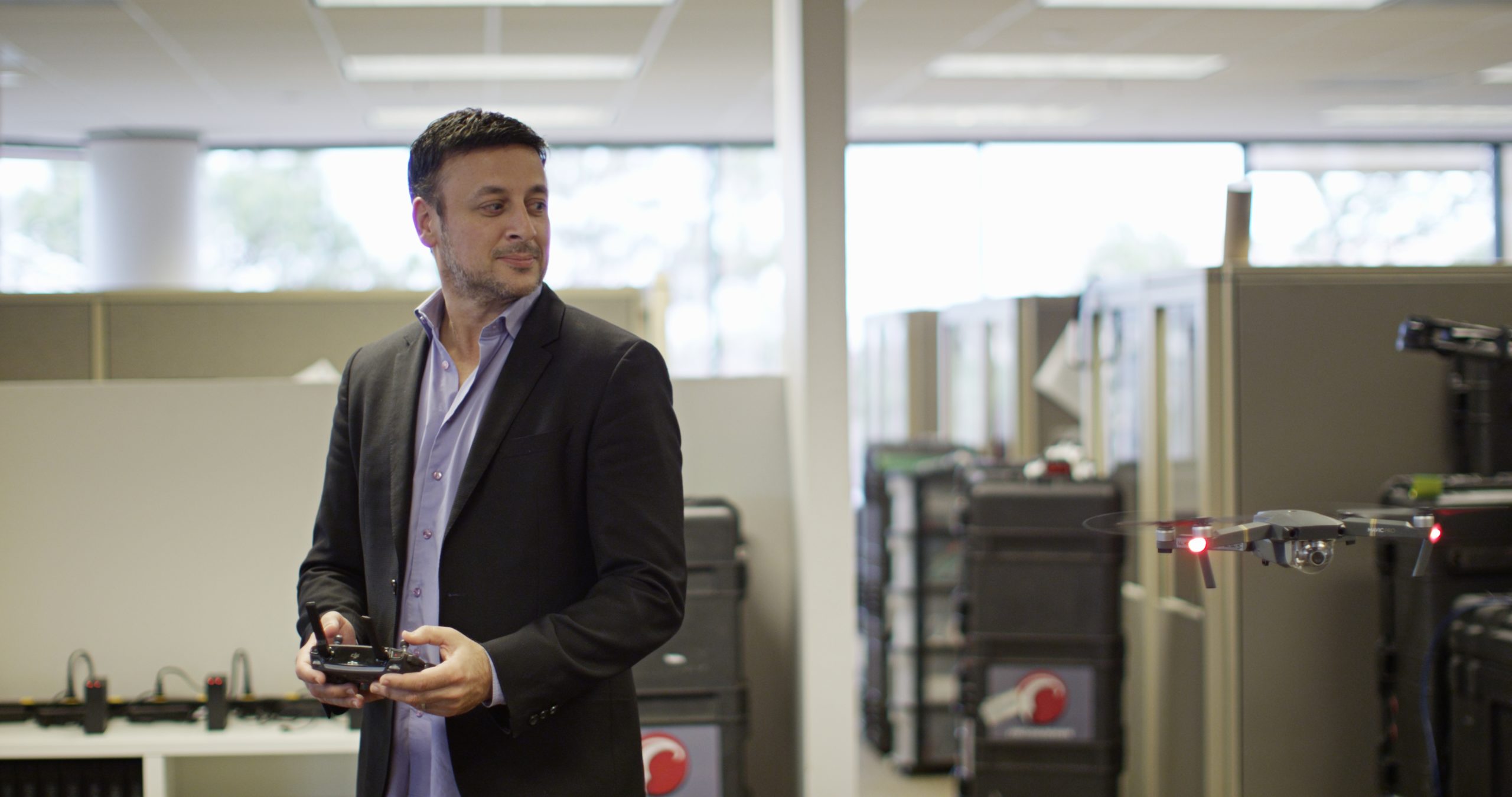 Michael Chasen took the reins as CEO of PrecisionHawk in January of 2017 and didn’t waste time becoming one of the most outspoken proponents in the commercial drone industry, advocating for the advancement of UAS. InterDrone was able to grab some time with him to get his perspective on PrecisionHawk’s recent hand off of its BVLOS research as part of the FAA’s Pathfinder Program and industry trends in general.

InterDrone: What’s on the horizon for BVLOS now that you’ve handed in your research?

Michael: There are three trends that most people haven’t realized outside the drone industry.

We’re starting to see drones that can now do extended flight times. There’s always been the large fixed-wing that could fly for hours, but those took professionals trained in launching one from a catapult on the back of a truck or even landing it into a net. It took a high degree of specialty. That’s beyond the training your average Part 107 pilot would have. What you really needed was VTOLs or multi-rotor drones that could easily take off and land, and have extended the time in the air. You’re now seeing that. There’s a whole new range of multi-rotor drones that are using a combination gas/electric engine that can stay in the air for three to four hours. So finally, you have technology that can be used by the average Part 107 pilot that can fly BVLOS.

That is coming out at the exact same time that the FAA is publishing its research, the Pathfinder Project, about safety cases and procedures to follow that make it safe to fly BVLOS. For example, the FAA coming out even a year ago, wouldn’t have even been beneficial, because the tech wasn’t there yet. In 2018 we’re seeing the tech come together at the same time and the FAA is putting out this research and expanding the way they are looking at BVLOS.

And lastly, you have the adoption of this tech, investing or continued investment by companies and key investors that believe this tech that is going to take off.

All of that will be coming together in 2018.

What else are you expecting in 2018 besides BVLOS advancement? What else is interesting as far as progress industry-wide?

I want to go into this new job creation, which is the third bullet point of why I think 2018 is going to be this critical year. I don’t know if drone pilot was a job title people thought could be a career five years ago, or even three years ago. Now, we’re working with people whose full-time job is utilizing a drone for aerial imagery and analysis. We work with companies that want to take advantage of our distributed network on DRONERS.IO of ten thousand pilots here in the US to get this data from some remote area, and low and behold you can connect with someone with a drone and pay them for this analysis. Work within the UAS space, to me, is one of the big trends that’s going to take off in 2018.

Are you seeing companies starting to train internal employees?

We’re dealing with insurance companies, companies in the energy sector, companies in agriculture, that are hiring their own drone division. It’s not just that they are training individuals, they are literally training their existing employees or hiring part 107 pilots from the outside and bringing them on as full-time employees. They are not just looking at this as some part-time contract work. I think that is complemented by our drone pilot network with all these people who are willing to work on one-off projects. Also, we’re doing training with some companies to train their employees to get their Part 107 certification.

What are some of the projects you’ve seen and find most interesting?

The most interesting projects are the type of projects where the clients believe that something is technically possible but doesn’t necessarily know. We had a client in agriculture come and say can you detect phototoxicity from plants, we had someone say can you fly over methane tanks and be able to determine how much methane is in them. In both those cases prior they used a very manual process.

To me, those are the most interesting projects. We honestly say we don’t know, but we put our team of tech experts on it and it turns there’s an entire new business opportunity we can work out with the client.

So you started at PrecisionHawk in January?

January of last year, but before that, I was the co-founder and CEO of a large e-learning company called Blackboard. Then I started another company called Social radar, which figured out how to get the exact latitude and longitude of every door for every business in the United States. During that time, that’s when I first came across PrecisionHawk. I was thinking of taking a drone and flying over a city with LIDAR to get the exact location of buildings. I researched and found out I would not legally be allowed to do that and that there was company successfully doing LIDAR called PrecisionHawk.

It was just a coincidence that a gentleman named Bob Young, who was the founder and CEO of Red Hat Linux and was the first angel investor in PrecisionHawk. He said to me, “I have this great company I’m an investor in and we are looking for somebody to take it to the next level.” I fell in love with the company and was always interested in the space, and then I decided to come aboard and officially join the team.

What was it like jumping into the fold at a skyrocketing company?

I think there’s always something to learn. I am benefited by the fact that this industry is still so new and has been growing so much. Getting up to speed was not the issue, staying current over the last 12 months has been an even bigger challenge.

The things that are the same are really two-fold. The people here don’t just find their jobs interesting, but half of them go home on the weekend and fly drones. This is not just a job for people, it’s a passion. The second way it is similar is like when I started Blackboard back in 1997 we called a bunch of schools and asked them are you going to use software for teaching and learning and put it on the internet and they all said no. Similarly, here, I don’t even think we are at day one, because I still can look out my window and there are no drones flying around, and yet I know that within just a few years or even sooner, I would be surprised that in your line of sight you wouldn’t be seeing drone technology at work.

Knowing that this is on the precipice of taking off makes it an exciting place to work.

What was the process of working with the FAA on the Pathfinder Program, and what would you say to somebody who has concerns that the government is picking winners?

This is a great example of the FAA working hand in hand with industry to address areas of opportunity and concern and then put in place the policy or rules that will allow corporations to do better. I think it’s great that the FAA took the time to look to the industry to help them put together the research on what individuals or business would need to fly beyond visual line of sight safely.

And now with this report, which will still go through a couple revisions over the next few weeks before its made generally available to the public, will give people a clear roadmap. 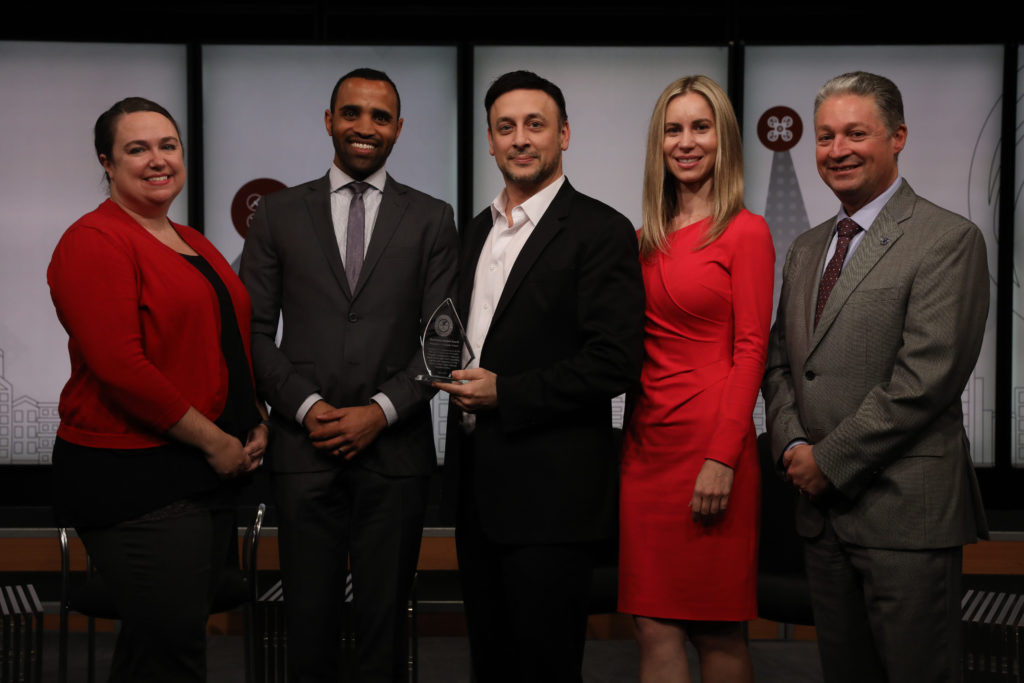 I had seen Allison Ferguson, Director, Airspace Safety Research at PrecisionHawk, speak about the step process you went through to establish protocols for safe BVLOS flight, could you walk through that?

The first version is what you would call an extended visual line of sight, you could fly one of two ways with a spotter, so the pilot doesn’t have to be there. There were two companies, us and Flir, that are allowed to fly BVLOS in a 4-mile radius as long as you could see a plane. We were able to utilize that as part of the Pathfinder research to then be able to test flying when people couldn’t see the drone and had to rely on technology to identify when aircraft was coming.

There’s a new director at the FAA this year, how has their outreach to the done industry been compared to the past?

I think already it has been expanding positively. The white house has been very vocal about drone technology, being that it can contribute to the growth of this economy and they’ve been very supportive, but the existing FAA has been great too. Even though there are some changes at the top, the FAA has been doing a great job, and I think with the support we’ve been getting out of the White House, we can expect more of that same thing.

What’s some advice you can give amateur drone pilots or small drone business owners to reach the next professional plateau?

I do encourage people to get their part 107 certification because I think that can open them up to not only having a better understanding of the rules and regulations of flying and maneuvering aerial vehicles, but it will also open them up to other business opportunities.

I would strongly encourage them to join communities. In particular, ones like our drone pilot network droners.io, they can not only connect with other pilots but potentially get some work on the side. That could eventually lead to full-time employment.

I tell everybody to stay active on the policy side, make sure you read up on the different rules and regulations so you’re working within the law and make sure you’re following the different flying restrictions. Also, being active in the community and trying to push and find if there are ways to open up the regulation and make drones more prevalent. I think everything from people getting certified at a higher level to joining the community to being more active as a proponent of UAS technologies are all great ways to be involved.