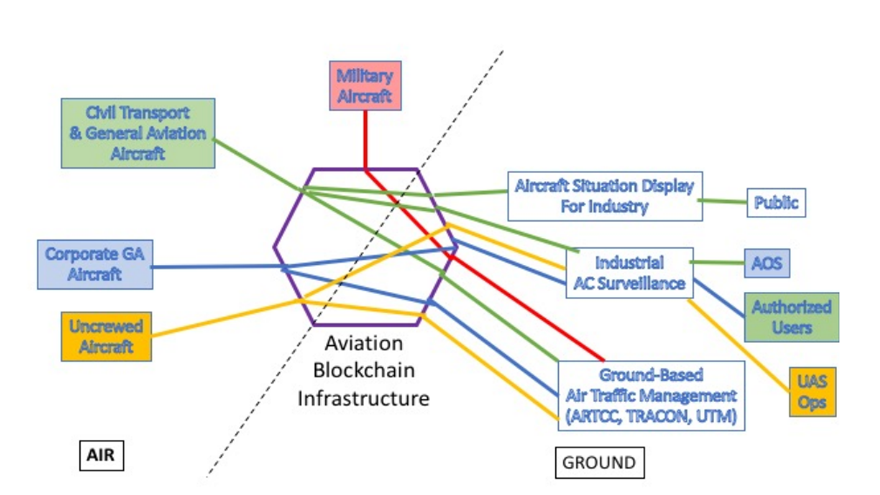 ADS-B is system that relays satellite telemetry data between aircraft to aircraft and from aircraft and ground stations. It is slated as the eventual replacement of the ground-based radar systems implemented today with the future GPS-based NextGen air system. The automatic and broadcast portions of its name point to its continuous transmission of aircraft data. NASA’s research aims to alleviate concerns among industry stakeholders and operators about the privacy of end users and the security of the system from attack.

“It is widely recognized that there are still unsolved issues that complicate ADS-B adoption for stakeholders” Resiman stated in the paper going on to list security issues like spoofing and distributed denial of service attacks (DDOS).

The paper proposes a lightly permissioned blockchain framework, which will split the data between a layer where all participants share permissible data and one where data are secured and only accessible the appropriate parties under strict conditions. This allows for the privacy of not only private industry and civilian operators, but also allows for military aircraft to share their position without having to divulge their identity. It implements this through a permissioned Distributed Ledger Technology (DLT) where all participants on the network can access the public layer of the ledger and every transaction (in this case broadcast) in its history.

NASA isn’t the only entity looking into establishing a secure framework for real-time airspace mitigation and aircraft tracking. Last week. AirMap, Kittyhawk.io, and Wing broached these concerns while announcing their work on an InterUSS network-based remote ID platform.