InterDrone keynote addresses how the industry can move forward 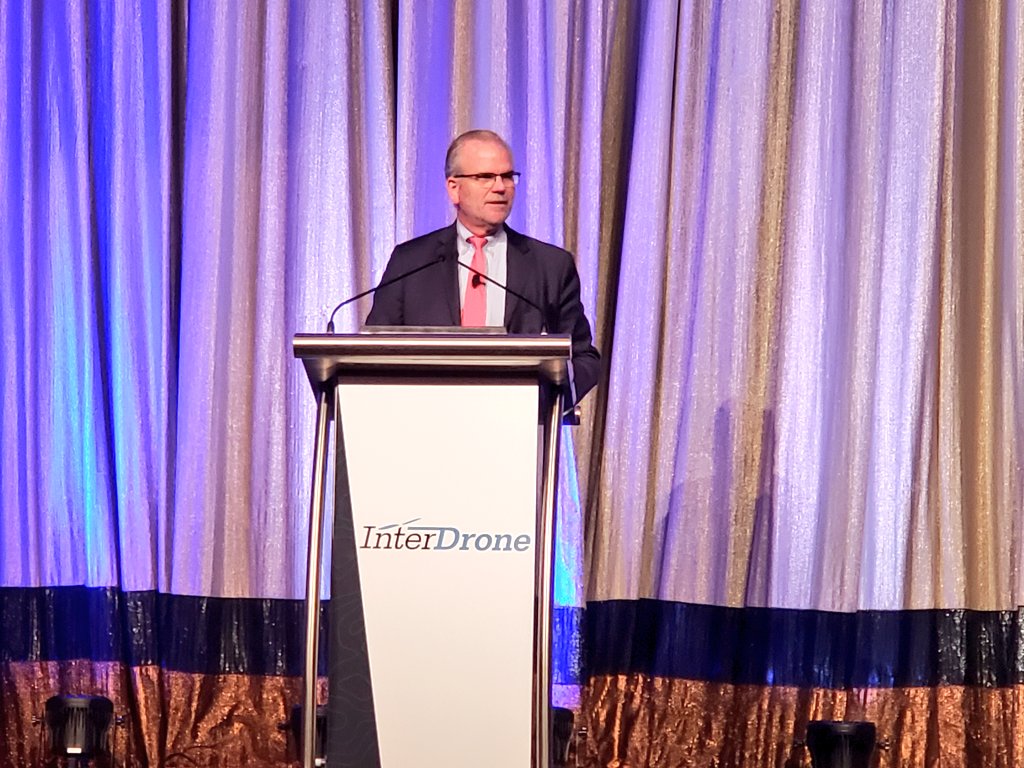 Last week, a widely-circulated Bloomberg article addressed an inevitable “Bubble burst? in the drone industry. Ten high-profile drone startups have shuttered over the past decade and hype looks to be cooling. However, the mood at InterDrone’s keynote address was one of optimism backed by solid suggestions to move the fledgling industry forward. PrecisionHawk CEO Michael Chasen and the Federal Aviation Administration’s (FAA) Deputy Administrator, Daniel K. Elwell, offered up their wisdom to a packed room of conference attendees.

Chasen and Elwell are industry veterans with a track record of success. Elwell was sworn in by President Trump as the FAA’s Deputy Administrator after serving as Acting Administrator upon Michael Huerta’s June 2017 departure. He also served as Senior Advisor on Aviation to Secretary Elaine Chao.

Chasen joined PrecisionHawk in late 2017 and, since then, has secured an impressive $75 million in additional venture capital. The company has acquired five startups since then including Uplift Data Partners and Droners.io. Prior to joining PrecisionHawk, he was the co-founder and CEO of a leading global eLearning organization. He grew Blackboard to serve over 30,000 institutions, oversaw 3,000 employees, and expanded the company’s presence to twenty offices worldwide. After taking the company public in 2004, he sold it for $1.7 billion in 2011. Chasen was recently named Head of the FAA’s Drone Advisory Committee earlier this year.

Chasen kicked off the packed keynote by placing responsibility on the private industry for moving the drone industry in the right direction. “We need to understand what is going on today and what needs to happen for that next big step forward.” In a fledgling industry, it’s not enough for companies to simply give customers what they want. “Our job is to figure out what they’re going to want before they know they want it,” says Chasen.

At the moment, Chasen views the industry as one stuck in a chasm and striving to get to that crucial “Next level? of expansion. Examining PrecisionHawk’s numbers, however, paints a brighter picture. One year ago, PrecisionHawk’s average deal topped off at $35,000. Today, that average has increased to over $1 million. “Our growth and our deal size lead me to believe that we are crossing the chasm,” he says.

As head of the FAA’s Advisory Committee, he shared the five major areas the organization must address:

Elwell followed up with talks about integration. He said that himself, and the FAA’s new Acting Administrator, Victoria Wassmer, want drones to operate safely alongside manned aircraft. “We are UAS integration advocates…we do not want to segregate drones: we want to integrate drones into our airspace.” Those words have been backed up by action. The past few months have signaled big progress towards that goal, with consistent activity in the UAS Integration Pilot and similar government programs that emphasize public and private partnerships. “We are making progress toward full integration of drones,” Elwell says. “The idea is to ‘crawl, walk and run,’ but we are doing so rapidly.”