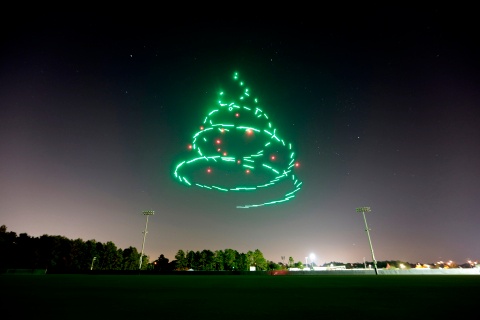 In the last week, both Disney and Intel have made headlines about their visions to bring light shows to life with the use of drones. Intel recently released its Shooting Star drone, while Disney teased the idea of presenting a light show sometime this year. Today, the companies are announcing they will be teaming up to make this happen for the holidays.

“We are excited to work with Walt Disney Imagineering to bring a fresh and innovative approach to its world-renowned light shows,” said Josh Walden, senior vice president and general manager of Intel’s New Technology Group. “Together, we worked to tackle a new frontier in entertainment, picturing the sky as our canvas and flying lights as ink.”

Intel will be providing its Shooting Star drone to pull off the ‘starbright Holidays”An Intel Collaboration? show at Disney Springs in Disney World. According to the companies, this is the first time a drone performance at this scale will happen in the United States. It will use 300 Intel drones to “Dance? to a series of choreographed holiday-themed music.

“We are thrilled to collaborate with Intel on this exciting entertainment experience,” said Jon Snoddy, executive vice president of Disney Imagineering. “By combining our technological capabilities, we will be able to light up the sky this holiday season.”