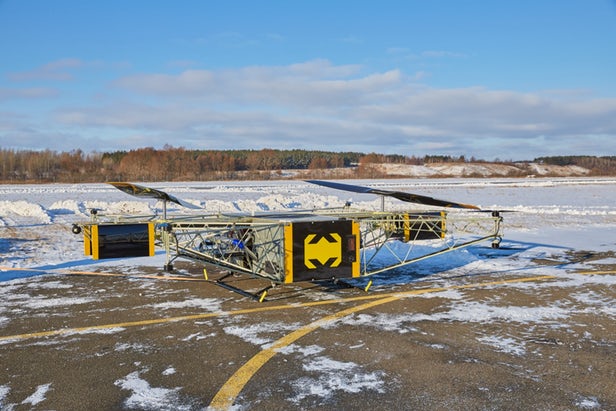 Russia-based company ARDN technology, creators of the heavy-haul multi-rotor SKYF, have set a new Guinness World Record for the heaviest weight to be lifted by a remote-controlled multi-copter when it carried 220 lbs (100 kilograms) the distance of 328 feet (100 meters). This breaks a 2016 record when students from the University of Oslo lifted a 134 lb payload (61 kilograms) by multi-copter. While not officially in the books, the company applied right away to the Guinness Book of Records committee to mark the success.

The day the record was set in Tatarstan, Russia, two modifications of the drone, SYKF CARGO and SKYF ARGO, were demonstrated. SKYF CARGO shattered the previous payload record while the ARGO “demonstrated an autonomous system for crop dusting developed at SKYF design bureau. The spraying jet is positioned under the main rotor and produces a fog rather than larger droplets spray, which gives greater coverage of the target area by surrounding the plant,” a press release said.

“We have finally completed a critical stage in the SKYF’s development and production. Now, we are happy to share the results. SKYF AGRO is already fully prepared for trial operations. We hope SKYF CARGO modification will be ready at the end of 2019. Also, we start preparing the launch of mass production. I am sure that “Air trucks? will become a kind of routine soon,” said Alexander Timofeev, SKYF’s CEO.

Several countries, including Turkey, Saudi Arabia, Vietnam, Japan, and Sweden, have already expressed interest in the $225,000 a piece drones, which can be used in extreme temperatures experienced on a tundra, or in a taiga or desert.