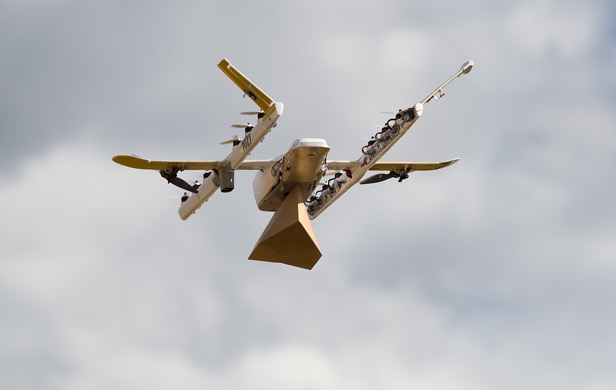 Earlier this month, there was speculation over who was going to receive the first Air Carrier Certificate from the Federal Aviation Administration (FAA). Only one company, Wing Aviation, and offshoot of Google, was listed as an applicant on the U.S. government’s website. This past Tuesday, the FAA granted them permission to begin commercial delivery of packages and goods via drone.

The certification signals a promising start for integrating drones into the National Airspace System. Currently, it allows Wing to start delivering food, medicine, and small consumer goods to homes in Blacksburg and Christiansburg, Virginia. Now that the FAA has given the go-ahead, Wing is seeking out local businesses to partner with in both towns.

“This is an important step forward for the safe testing and integration of drones into our economy. Safety continues to be our Number One priority as this technology continues to develop and realize its full potential,” said U.S. Secretary of Transportation Elaine L. Chao.

For several years, Wing has worked with the Mid-Atlantic Aviation Partnership and Virginia Tech, as one of the participants in the Transportation Department’s Unmanned Aircraft Systems Integration Pilot Program. By gathering extensive data on trial deliveries, they were able to prove to the FAA that operations were safe and effective. Wing also secured authorization to sell goods in Australia earlier in the month after conducting over 70,000 test flights and completing 3,000+ successful deliveries to customers in the suburbs of Canberra.

As the program expands, Wing will continue to work with local governments to determine where its drones can be launched and operated. It will also conduct extensive community outreach by placing fliers in mailboxes where deliveries are planned, administering surveys, and holding regular town hall meetings.

One pilot can operate up to five autonomous drones only during daylight hours, when the weather is clear. Since Wing acquired certification as a chartered airline, which is good for two years, its fleet can travel beyond visual line of sight, and over people though drones cannot hover over crowds.

The drones have a 3-foot wingspan and weigh around 11 pounds. Parcels topping off at 3 pounds will be lowered into yards via a tether. One factor that could potentially irk residents in neighborhoods where deliveries are common is the loud, unfamiliar buzzing sounds generated by the drones. Reportedly, Wing is working on more aerodynamic propellers to significantly reduce noise.

Overall, it signals a promising development for the U.S.” a country that has lagged in experimentation with integrating drones into national airspace due to security and privacy concerns.

Wing outlines the benefits of drone delivery in a recent Medium post. It gives more autonomy to those with mobility challenges. A parent left alone with a sick child no longer needs to drive to a store to fetch medicine. Drone delivery will free up more spare time for those working long hours. With fewer cars on the road for running basic errands, traffic will be reduced which will, in turn, lower pollution and carbon emissions.