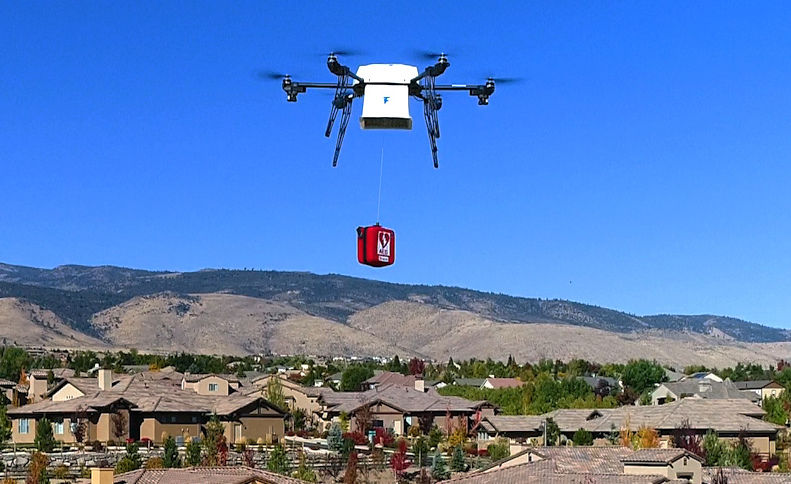 This past Tuesday, the Federal Aviation Administration (FAA) released a notice of policy to issue type certificates for certain classes of unmanned aerial vehicles under 14 CFR ??21.17(b). What this means is that the FAA has proposed a policy to ensure that drones used for delivery are outfitted with proper features so they meet specific safety and airworthiness requirements. This will enable companies such as Amazon, Wing Aviation, Zipline, and more to pick and choose which features they want to incorporate on their delivery drones. Then they can start expanding operations and the scope for routine deliveries once the policy is approved.

“This proposed policy applies only to the procedures for the type certification of UAS, and is not intended to establish policy impacting other FAA rules on unmanned aircraft, such as operations, pilot certification, or maintenance,” the notice of policy states. Public comments are open until March 4th. It is in no way related to the Remote ID Notice of Proposed Rulemaking, whose commentary is due two days before. The timeline on implementing any changes on the latter notice is expected to take up to 5 years.

The latest notice of policy for drone delivery will be key in establishing guidelines for operations over people and beyond visual line of sight (BVLOS). Amazon has long been pushing for this type of proposal and even applied to operate as a Part 135 air carrier back in August. While a spokesperson from the retail giant wouldn”T comment to the Wall Street Journal, who first reported it, I can confirm that Amazon Prime Air currently has recruiters reaching out to potential candidates for Flight Operator positions.

“We broadly support the FAA’s announcement for type certification of certain UAS as a special class of aircraft,” said Brian Wynne, CEO of the Association for Unmanned Vehicle Systems International (AUVSI) tells Avionics Magazine. “We are pleased that the FAA recognizes that unmanned aircraft require particularized airworthiness criteria for package delivery operations of UAS. This new type of certification proposed will streamline the approval for those wishing to use UAS for this purpose and will help pave the way for widespread UAS deliveries in the future.”

All indicators point toward the FAA eagerly looking to incorporate more unmanned aircraft into the national airspace on a larger scale and this is a crucial first step. Though this latest policy will likely take a few years to implement, companies like UPS, who has successfully delivered over 8,000 medical samples on the WakeMed medical campus in North Carolina, is expanding to University of California, San Diego. The company confirmed it is authorized to receive payments and fly BVLOS. Aqualine drones, a Connecticut-based company, is finalizing the details for purchasing a small airline after receiving its Part 135 Air Carrier Certificate from the FAA. Aqualine is now one of four approved carriers in the U.S. alongside Wing Aviation, Amazon Prime (whose approval status is yet to be confirmed), and UPS Flight Forward.

The proposal to certify specific drones for delivery opens up the potential for more commercial drone applications, namely unmanned air taxis. Uber announced a partnership with car manufacturer Hyundai at this year’s CES while Porsche has partnered with Boeing.