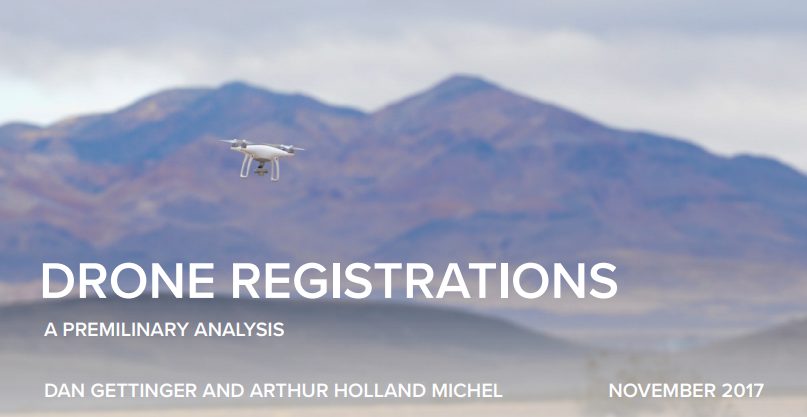 On November 14, the Federal Aviation Administration publicly released a treasure trove of information on the number of drone registrations up to October 31, 2017. According to its database and a thorough analysis by Dan Gettinger and Arthur Holland Michel of the Bard College Center for the Study of the Drone, 2017 showed an uptick in non-hobbyist registrations while hobbyist user registrations slowed.

In December 2016, one year after the implementing the registration rule, the FAA reported over 600,000 drones had been registered. Today, that total number is 943,535, of which 106,739 are registered for commercial drone use. (It should also be noted non-hobbyist users are required to register each drone they have while hobbyist flyers only need to register once, but can own several.) 105,806 are registered within the United States and its territories, and 933 are registered in 76 countries and territories outside the U.S. The top non-U.S. countries with registrations are: Canada (207), the U.K. (112), Germany (72), Australia (52), France (46), and Israel (41).

Drilling further down into the dataset, states with low population densities are more likely to have commercial drone registrants. “The five states with the greatest number of non-hobbyist drones per capita are, in descending order, Alaska (71 drones per 100,000 residents), Idaho (71 per 100,000), North Dakota (64 per 100,000), Colorado (61 per 100,000), and Montana (59 per 100,000). Together, these states? account for 5.4 percent of all drones, even though they only make up about three percent of the U.S. population,” according to the Bard College analysis. Interestingly, Washington, D.C, despite its restricted airspace and need for special permissions to fly, has over 98 drones per 100,000 residents.

The analysis also considered the number of Part 107 Remote Pilot certifications per 100,000 residents in each state. The top five states for non-hobbyist registrations (Alaska, North Dakota, Colorado, Idaho and Montana) also coincide with the most Part 107 certifications per capita.

The dataset also recorded the type of drone that was registered. DJI was the most common used drone (specifically the DJI Phantom 4) for non-hobbyists and accounted for 70 percent of commercial drones registered. The second and third most popular commercial drones are Intel’s Shooting Star 2 and the 3DR Solo.

One interesting tidbit about Intel is its Shooting Star drone is not available for public purchase and is typically used in its aerial light performances. This could indicate Intel is the sole registrant of the Shooting Star, making the technology company the largest single owner of drones in the United States besides the military.