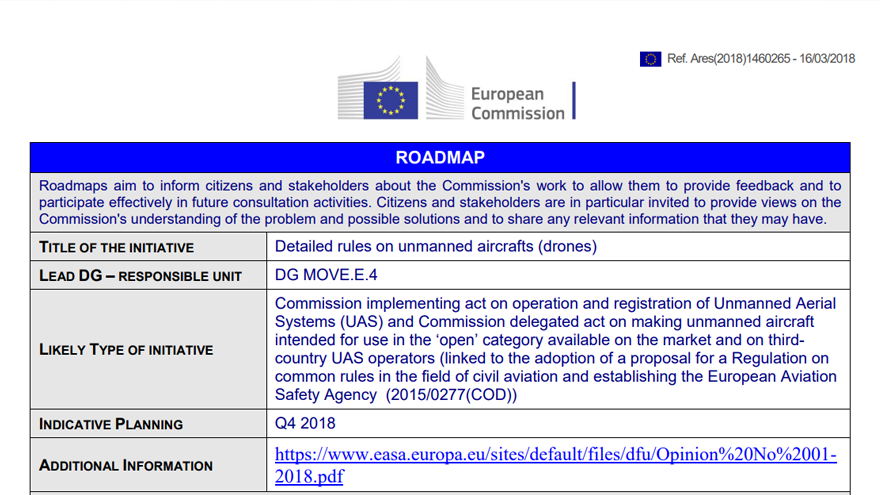 The European Commission, which proposes legislation, implements decisions, and upholds European Union treaties, put forth delegated regulation on new rules for unmanned aircraft. Outlined in the draft are provisions for integrating drones within the unified European airspace as part of U-Space (the European UTM).

The main thesis of the regulation roadmap is to provide guidance to build a safe and unified system for managing the flights of unmmanned aircraft within the EU, and to establish a shared regulatory framework that can be shared across nations. In section A of the regulation it is stated, “As the pressure for launching drone operations is growing in the Member States, there is a risk of a fragmented regulatory system tampering the development of a single EU market for drones manufacturing and cross-border drones operations,” and it then continues with the basis for intervention.

While in the United States small UAS use is broken out into casual and commercial categories, the European Commission delineates three categories of usage, Open, Specific, and Certified. The need for geo-fencing and electronic identification has been expressed for the Open category, which includes low-risk flights not requiring authorization. Although it is not clearly spelled out for the Specified category (medium risk and BVLOS) or the Certified category (high risk), drones that can be purchased for Open use will be required to have some form of remote identification, and as such the majority, if not all, drones available on the market will be forced to have an ID.

The Drone Manufacturer’s Alliance (DMAE) and the Drone Alliance Europe (DAE) have stated their support for the roadmap proposed by the commission.

The EU Parliament and Council will generally have two months to propose objections to the commission’s proposed regulation. If none are found the act enters into force, but as a roadmap delegated regulation will act more as the starting point for more detailed legislation.

InterDrone is pleased to announce that Dawn Zoldi, CEO of P3 Tech Consulting will be...