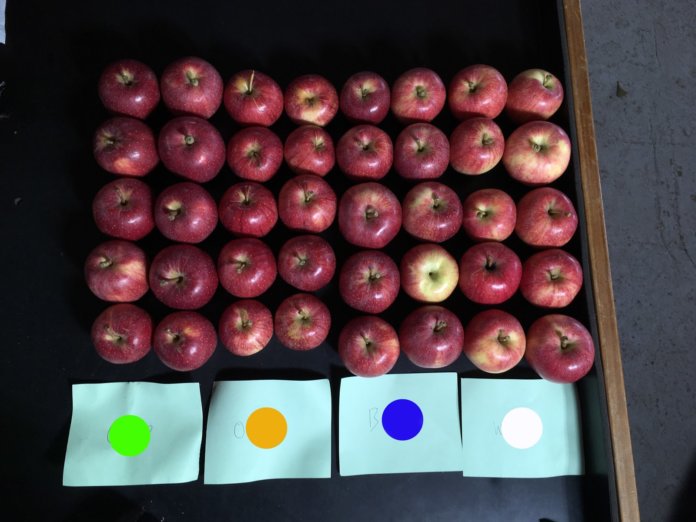 Dropcopter, a provider of an aerial pollination solution for the agriculture industry, recently released results from test pollinations of an apple orchard, which they started in May. Using its patent-pending “Worker-Bee” pollinator, Dronecopter partnered with Beak and Skiff Orchards in Central New York to target and pollinate the largest “king blooms,” while preventing pollination of smaller flowers.

King blooms are important since they open first and produce the largest apples, which can double the price at market. The smaller flowers tend to open a week after the king blooms, producing smaller fruit and reducing the overall quality of the crop. When this happens, orchards are forced to hand-cull the fruit at more than $500 an acre. Armed with this knowledge, Dropcopter focused its test operations on the king blooms as soon as they opened. Once pollinated, the trees were immediately netted with a bee barrier to prevent further pollination.

This approach ended up yielding bigger, more high-quality fruit as well as a more uniform size and coloring (as illustrated by the apples in the green group in the photo) since pollination occurred at the same time across the orchard. This outcome also meant a farmer only needed to harvest the trees one time, reducing labor costs.

On the heels of these results, Dropcopter received its a Part 137 Exemption for spray operations. “The low altitude and rural environment of farmland needs to be reexamined as a place where drone integration is pushed,” said Adam Fine co-founder of Dropcopter. “We are very proud of our accomplishments with this research. With our new 137 Exemption, we will be able to conduct further studies and prove that utilizing drones for this type of agriculture is not only safe but profitable for farmers and orchard owners across the United States,” he added.

The technology is also unique as it takes the burden of pollination off bees when they are scarce due to weather conditions or from the current crisis of them dying off at alarming rates. According to Dropcopter, a 1,000-acre farm can spend $400,000 on honeybees alone each year, so using its solution as a supplement could be a cost saver.

The company is now planning additional tests in other orchard produce such as walnuts, avocados and stone fruit as well as raising capital and exploring expansion into foreign markets next year.