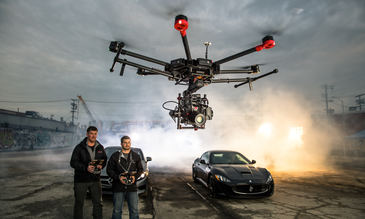 DJI is introducing a new solution for photography, filmmaking and industrial apps. The company has announced the Matrice 600, its next-generation aerial platform designed to give more power to photographers and cinematographers.

“For film directors, the M600 is a game-changer,” said Sheldon Schwartz, executive creative director for DJI. “There are other options out there, but none that integrate a top-class flight controller, video-transmission system like Lightbridge 2, and support for a wide range of cameras and gimbals.”

The M600 is compatible with the company’s Zenmuse gimbals, and comes with a new A3 flight controller that can be updated to the A3 PRO system, which features advanced diagnostic algorithms that compare sensor data from three Global Navigation Satellite System (GNSS) units and three inertial measurement units. In addition, the A3’s GNSS can be upgraded to DJI’s Real-Time Kinematic technology.

“The M600 is the most powerful and easiest to use professional platform DJI has ever produced,” said Paul Pan, senior product manager at DJI. “We’ve pre-programmed all M600 platform data and information into the A3 flight controller, remote and transmission system to minimize setup and get you flying as quickly as possible.”

Developers can take advantage of the M600 through the DJI Onboard SDK and Mobile SDK, which feature dual parallel CAN and API ports for connecting DJI devices such as the Guidance sensor system, PTK GPS units or third-party components.

According to Schwartz, users can also pair the M600 with the company’s new Ronin-MX, designed to provide aerial video stabilization. “If you go with the new Ronin-MX on the M600, you’ll be surprised at how easy it is to get unparalleled stability and cinematic-quality shots,” he said.