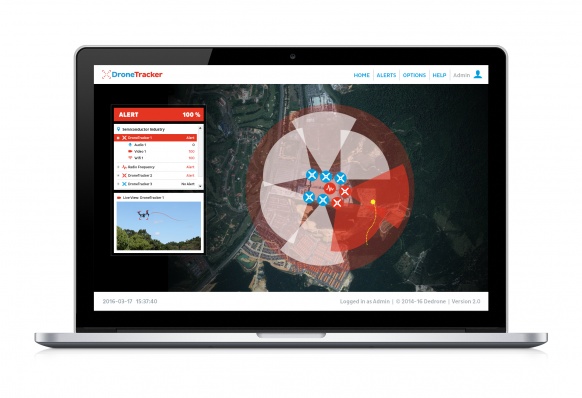 On one hand drones can be used to do a lot of good; on the other hand, give drones to the wrong people and they can be destructive. Dedrone sees a flourishing future for the industry of drones, but it wants to make sure people on the ground are protected from the misuse of drones from above.

“The more drones the industry sells, the more misuse we have,” said Jrg Lamprecht, CEO and cofounder of Dedrone. “The more drones out there and the more capable they are, the more they will also be used for bad intentions.”

Dedrone provides DroneTracker, a drone detection system, designed to monitor the airspace and detect rogue drones. DroneTracker features 24×7 surveillance, immediate alarm notifications, video, a cloud service, multi-sensors, and extended API access. The system can also detect the type of drone, the payload it can carry, and how long it can fly. It can also triangulate the operator on the ground.

“The easy configuration and integration with third-party alarm systems allow our customers to identify and remediate threats quickly and efficiently. Depending on requirements, various countermeasures, such as jammers, can be integrated into the DroneTracker and be triggered automatically,” Lamprecht said.

The company recently announced a $10 million series A round of funding that it will use to advance its drone detection technology and expand its sales and marketing team. “Any institution with an elevated need for security must now protect its airspace against intrusion from drones, and Dedrone passes that control back to our customers,” said Lamprecht. “This funding allows us to strengthen our leadership in this emerging market.”

Dedrone is already being used to protect critical infrastructures such as data centers, prisons, oil and gas facilities, and stadiums.

Dedrone was previously based in Kassel, Germany, but recently moved its headquarters to San Francisco because it saw a growing interest in drones in the United States. According to Lamprecht, there is more of a movement for modern technologies in the U.S. than the company saw in Europe.

“Drones are really changing the way we live, the way we deliver goods, and the way we receive information in a very substantial way,” he said. “We are here to provide a global sensor network to watch the lower airspace and to monitor drone activities.”