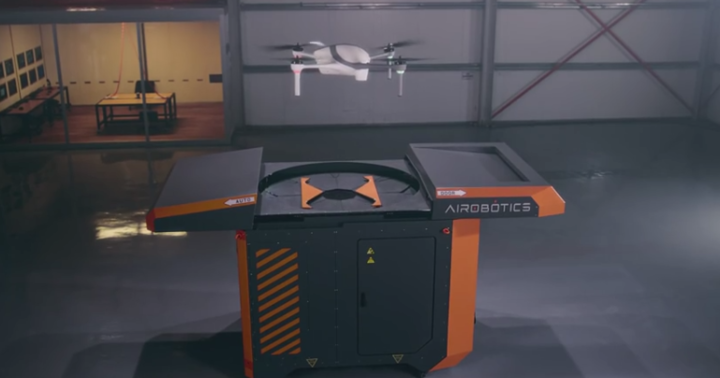 A new end-to-end solution for collecting aerial data and gaining insight into businesses is coming to market. Airobotics, an aerospace technology provider, has unveiled its autonomous drone platform to the public. The new platform aims to provide industrial enterprises with the ability to monitor, inspect, survey and secure their facilities and strategic sites.

“The Airobotics end-to-end drone solution goes far beyond standard drone options,” the team wrote on the company’s website. “The platform was designed and built by a multidisciplinary team to answer the needs of industries such as energy, mining, and oil and gas by providing a safe, cost-effective solution available on-site and on-demand.”

Airobotics features three components: Optimus, Airbase and Airobotics Software. Optimus is a drone that can fly up to 30 minutes while carrying a 1kg payload. It features precision control, a payload and battery module, and real-time video delivery to provide real-time aerial insights. Airbase is the base station the drone launches and lands from. It comes with a custom-designed robotic arm that is designed to automatically switch batteries and payloads without human intervention, system awareness, and an industrial-grade exterior. In addition, the platform comes with the company’s integrated software such as mission planning, data processing, and a user interface in order for users to control and manage their missions.

“I feel like this is the future,” said Yakov Kahlon, senior vice president of operations at Israel Chemicals, one of Airobotics? first customers. “The Airobotics platform has provided us with a highly effective tool that is cheaper economically and saves us time. With the platform, we can measure in one day what once took multiple days to measure.”

The company is also providing developers with the tools necessary to develop new solutions and integrate new sensors. It has also recently secured a $28.5 million round of A and B funding.

“When I first met Ran [Krauss, CEO of Airobotics] and heard of his plan for Airobotics, I was immediately hooked,” said Noam Bardin, former CEO of Waze and current Google Executive who has invested in Airobotics. “I called up my former investor in Waze, John Malloy, and said, “This is the most exciting thing I have seen out of Israel since Waze. We have to get into it.” The combination of disruptive vision, engineering powerhouse from the Israeli Aeronautics industry, and hands-on experience running drones commercially, makes Airobotics uniquely positioned to own the industrial drone space.”