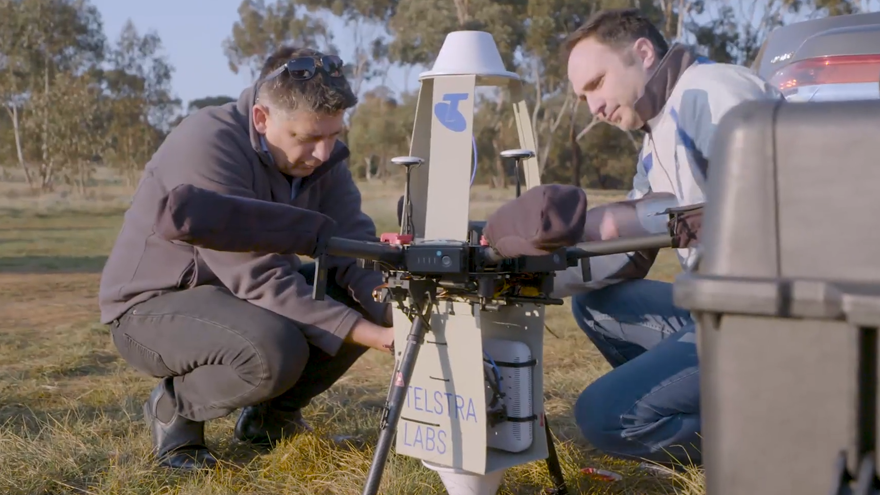 Fives drones, one pilot, and a mobile cell on wings. This is the newest technology showcased at Telstra Vantage 2018, an annual business and technology conference, by Telstra, Australia’s largest telecommunications company. The featured drone “swarm” also utilized its own 4GX mobile network, demonstrating a strong use case for more rapid response in dire situations such as a natural disaster.

First exhibited earlier this month in Laverton, Victoria, the Telstra Labs Team flew “the group of drones controlled by a single pilot flying in formation and using vision capture to quickly and efficiently map an area impacted by fire or flood. As the technology matures, allowing for more than one drone per pilot, drone swarms will be able to be deployed routinely to simultaneously cover and search a large area,” the company said.

An integral part for successfully pulling the swarm off was a “cell on wings,” a small cell mounted on a drone that temporarily provided mobile coverage in a remote area. This allowed for faster data digestion and quicker decision making on the ground during an emergency situation.

As 5G continues to develop and becomes available in the future, drone operators will have access to a low-latency network, which will allow faster streaming of larger datasets, and bring us one step closer to real-time information. Emergency’s don’t care about human schedules, so this game-changing evolution combined with Telstra’s drone tech could save time when time matters most.