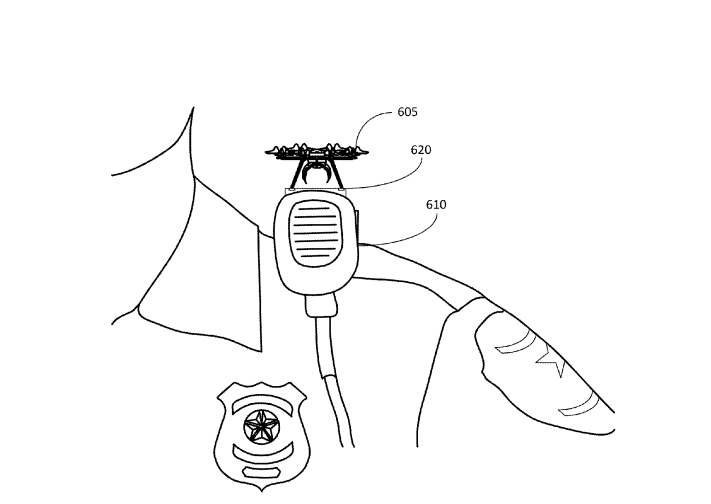 Amazon is bringing its Alexa technology to unmanned vehicles. The company was recently awarded a patent for an “Unmanned aerial vehicle assistant.”

The patent describes a drone designed to be smaller, lighter and cheaper than traditional drones; improve police support; and locate objects or people.

“The miniaturized UAVs can provide enhanced perception for the user to enable the user to [hover around] objects for improved visibility and safety, among other things,” the patent states.

Amazon also envisions the miniature drone being able to respond to voice control (much like its Alexi technology) and performance autonomous tasks. In images provided by Amazon, the patented technology is seen “Docked on a radio microphone docking station? and providing a police officer with support during a traffic stop.

According to Amazon, there are many situations where a user needs a different perspective of a situation, and with this patent users will be able to easily carry drones wherever they go.

“The UAV can act as eyes and/or ears, among other things, for the user to extend the user’s perception. The UAV may be used, for example, to record information from a perspective different than the user’s perspective, scout dangerous situations, or locate/retrieve items for the user, among other possible tasks. In some examples, the UAV can be small enough to carry on the user’s person (e.g., in a bag, in a pocket, on a jacket, etc.) and allow for ready deployment,” according to the patent.

Other examples Amazon gives for this technology included finding a lost vehicle, locating a lost child, supporting firefighters with a thermal imaging camera, being used as a security or recording device, and acting as a mobile dash cam.