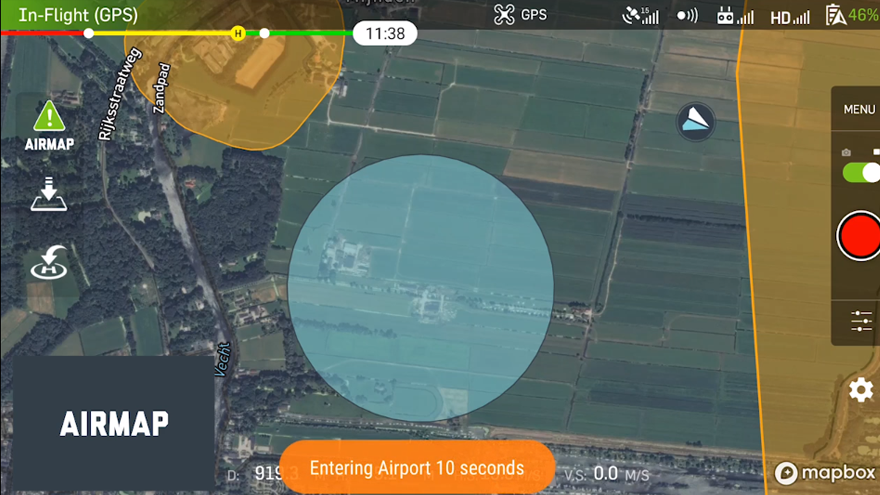 AirMap, the leading global airspace management platform for drones, announced Real-Time Geofencing Alerts in the AirMap for Drones mobile app on iOS and Android. Available for free, the feature alerts pilots of their DJI drone’s in-flight positioning and offers a visual and/or verbal alert when their aircraft approaches airspace that is unsafe for drone operations. Additionally, AirMap Real-Time Geofencing Alerts are also available to developer partners and OEMs via a mobile SDK for iOS and Android.

The AirMap for Drones mobile application offers a comprehensive set of digital services for drone operators that make it easy to learn about any airspace environment, plan a flight in accordance with regulations, and maintain awareness of nearby aircraft while in-flight, anywhere in the world. AirMap is trusted by hundreds of thousands of drone pilots to fly safely in low-altitude airspace.

As every good recreational and professional drone pilot knows, airspace is a complex and highly dynamic environment to navigate. Sometimes airspace conditions change mid-flight and emergency TFRs require nearby drone operators to adapt immediately. Other times, a drone may veer off course, deviating from its planned flight path and potentially entering regulated or restricted airspace that is off-limits for drone operations.

In fact, these scenarios are quite common. A recent study by Embry-Riddle Aeronautical University found that more than 20% of operators were flying higher than the safe altitude prescribed for their operating area, which means that more than 1 in 5 operations poses an unmitigated risk to manned aircraft operations. The study also found that 88% of operations took place near or above obstructions, urban structures, and other hazards.

Airspace safety can be greatly enhanced with more granular airspace information, collaborative use of airspace and real-time flight assistance enabled by a higher degree of automation and contextual intelligence. Pilots need easy-to-use and smart flight conformance monitoring tools that are configurable to their unique airspace environment, aircraft, and operations. Authorities need to be able to monitor conformance of all flights, and ensure that drones and other aircraft steer clear of airspace advisories, TFRs, and restricted airspace.

With Real-Time Geofencing Alerts, AirMap alerts pilots when they are approaching, on the edge of, or intersecting geofenced airspace areas in which drone flight is regulated (orange), restricted or prohibited (red). If the pilot’s drone’s positioning is less than 30 seconds from entering a new airspace boundary, AirMap displays a warning message onscreen and verbally announces the warning with the appropriate message, like “Approaching Class B airspace.” Real-Time Geofencing Alerts keeps pilots aware of impending safety concerns at any time while flying, even when airspace conditions change during their flight.

Building upon AirMap’s real-time contextual intelligence capabilities, Real-Time Geofencing Alerts will soon be able to go beyond just alerts, with the ability to prevent drones from entering an unsafe operating area or veering off a planned flight path, if the pilot has opted in.

AirMap Real-Time Geofencing Alerts are also available to developer partners and OEMs via a mobile SDK for Android and Swift (iOS) delivering airspace environment status information relative to the UAS flight path. By integrating AirMap Real-Time Geofencing Alerts in their UAS applications, AirMap developers will be able to build value-added services enhancing flight safety, compliance and overall experience for their users, like preventing drone operators from flying into airspace that is regulated or restricted, ensuring conformance of flight paths, or geocaging a drone’s operation within a defined airspace polygon, while leaving the ultimate control of the done to their users as needed.