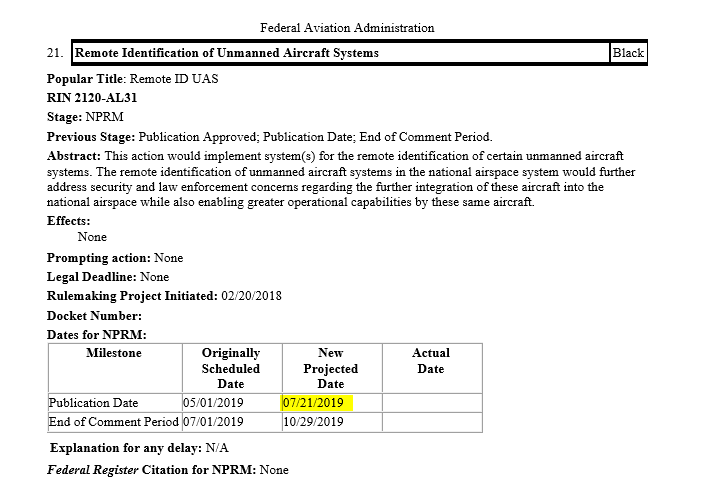 The Notice of Proposed Rulemaking (NPRM) for Remote Identification of Unmanned Aircraft Systems’ commentary period has been pushed back from the original intended start date of May 1, 2019 by 81 days to July 21, 2019.

Provisions were made for Remote ID in the FAA Reauthorization Act of 2018 as it became clearer that with DoD, DoJ, and DHS input that identifying all small UAS in the National Airspace System (NAS) was integral for security. Remote ID is considered by many as the first important step to the FAA permitting beyond visual line-of-sight operations.

For those unfamiliar with the NPRM for Remote ID the abstract states, “This action would implement system(s) for the remote identification of certain unmanned aircraft systems. The remote identification of unmanned aircraft systems in the national airspace system would further address security and law enforcement concerns regarding the further integration of these aircraft into the national airspace while also enabling greater operational capabilities by these same aircraft.”

During the government shutdown, concerns among the drone community grew that the event would delay important small UAS regulation, The concerns may appear to be validated, but the FAA has stated no specific reason for the delay. The commentary period will now start 20 days after the originally slated period for comment was supposed to close.