FAA Reauthorization Act of 2018 Passes with New Provisions for Drones 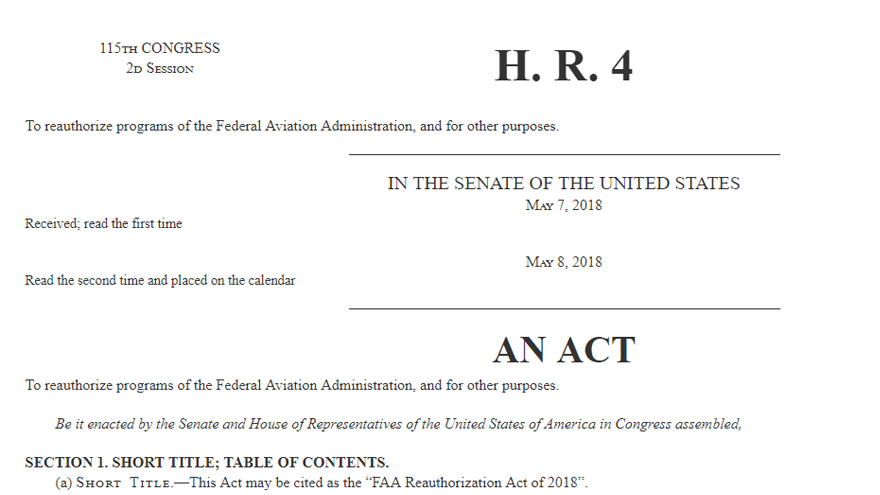 Yesterday, the Senate passed the highly anticipated FAA Reauthorization Act of 2018 with an overwhelming majority. A large portion of the bill covered small UAS flights within the National Airspace System (NAS) and some major changes were included.

The Section 336 protection, which prevented the FAA from regulating model aircraft was repealed, closing the hobbyist loophole. The FAA has stated in the past that Section 336 presented a roadblock in its plans to have every drone adopt a universal remote ID system. Now with its removal, recreational users must register their drone and pass an Aeronautical Knowledge Test. This was seen as necessary as step towards building a Universal Traffic Management system where both drones and traditional aircraft can be tracked effectively.

The FAA has been mandated to create another pilot program, this time for Counter-UAS technology and accurate incident reporting. Law enforcement will soon be enabled to report on illegal drone use by inputting incidents into a common database to be reviewed by congress on a yearly basis.

The Department of Justice and the Department of Homeland Security will now have the power to take down or track drones over secure facilities. This enforcement capability is more restricted than what was initially proposed by either the DOJ or DOH.

Sections 337 and 379 of the bill have provisions for data collection, management, distribution, and transparency. Commercial drone operators will now be required to have a privacy policy page on their website. In turn, the DOT will have to maintain a database of waivers, authorizations, operations, and registrations.

If you’re looking for a more in-depth look at the Reauthorization Act, DroneLife has done a 4-Part Series covering it in detail.