What’s the latest with the FAA’s drone regulations? 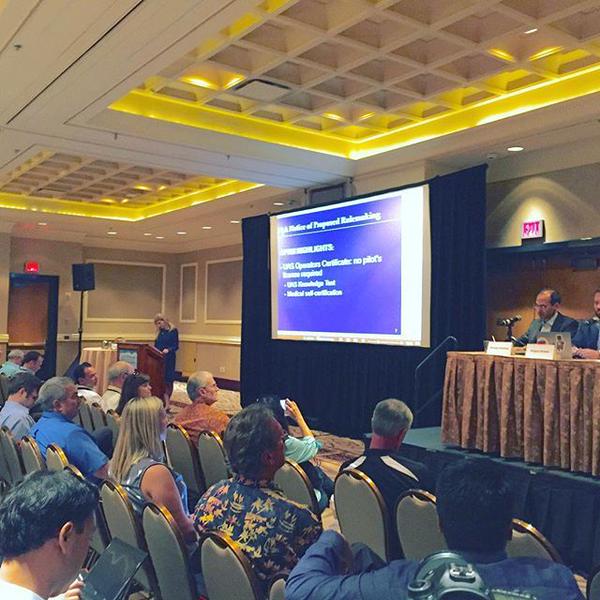 The Federal Aviation Administration (FAA) is still working on its first step in regulating small unmanned aircraft systems. A notice of proposed rulemaking (NPRM) was publicly released Feb. 15, and the period for comments closed on April 24. Now the industry is waiting for the FAA to complete its analysis, and if the recent FAA Regulations panel at the International Drone Exposition and Conference (InterDrone) in Las Vegas this week was any indication, the industry will have a long wait.

(InterDrone is produced by BZ Media, the publisher of InterDrone News.)

“I don”T think this rule will be finalized on the date it is supposed to be,” said Jonathon Freye, director for policy and strategy and creative director for Aerius Flight.

He was joined on the panel by Gregory McNeal, cofounder of AirMap; Jonathan Rupprecht, drone lawyer and commercial pilot; and Brendan Schulman, who recently became the vice president of policy and legal affairs at drone-maker DJI. The panel gave insight into where the FAA is with certain decisions, what can be expected from the rules, and what the rules mean for commercial use.

NPRM
According to Freye, the final stop in the rulemaking process will be White House’s Office of Management and Budget (OMB), which will review the rules through the Office of Information and Regulatory Affairs (OIRA). He noted that while the FAA’s NPRM comment period has closed, there will be another opportunity to comment on rules during the OIRA review.

Freye went on to explain that the rule hasn”T left the FAA yet, and isn”T expected to arrive at the OMB until early next year.

UAS operators certificate
Under the proposed rules, a drone operator would be required to pass an aeronautical knowledge test and obtain an FAA US operator certificate instead of having to obtain further private pilot certifications.

According to Rupprecht, this is a step in the right direction, but in the meantime it is very hard for operators who want to fly. Until the rules are finalized, he explained that drone operators still have to acquire a minimum of a sports pilot license, which is very time-consuming to obtain, to fly their drones under a Section 333 exemption.

The FAA also recently announced a Pathfinder Program for researching beyond visual line-of-sight, but prohibits the use of drones in congested areas. But “Congested areas? can be a confusing term, and is an example of a traditional aircraft regulatory framework that is not easily applied to drones, according to Schulman. He said that when asked, the FAA danced around the subject of what it really meant, and that this might change in the finalization of the rule because people are realizing traditional frameworks don”T really apply to drones.

“Micro? UASes
The FAA is starting to look at a possible framework for drones that weigh less than 4.4 pounds, also known as “Micro? drones. According to Schulman, this is not only a low-risk category, it is also one that drives people to a culture of compliance.

“If you have a safe operation in this micro category, and you understand 4.4 pounds and [are] following the rules…it enables people to use the technology that is already in their hands,” he said.