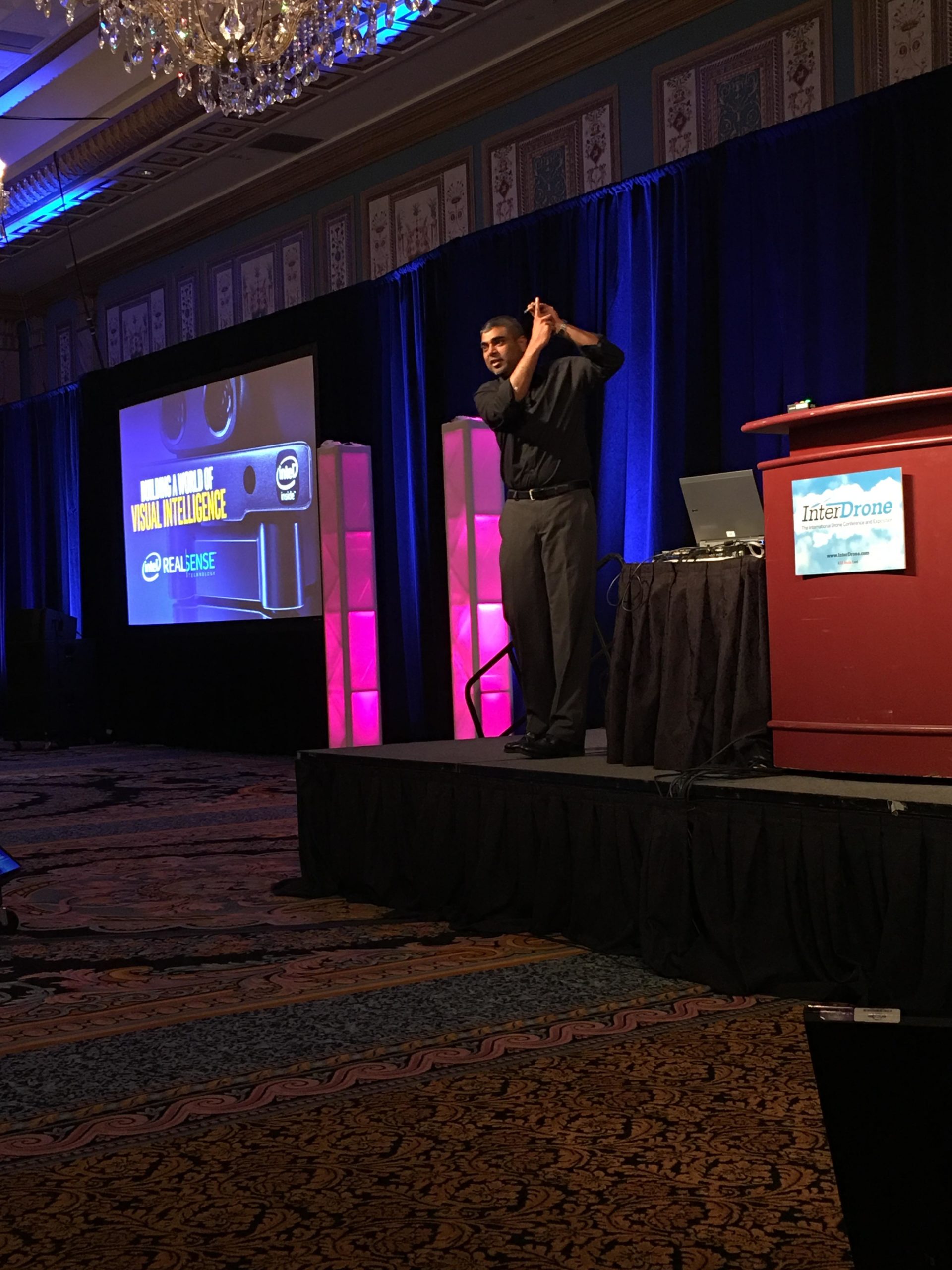 The drone industry is intriguing not just new businesses, but also older and more established businesses that have been in the technology space for a long time. Amazon, Intel and AirMap kicked off InterDrone’s first day of triple keynotes to show off how they plan on becoming a part of the emerging industry.

Misener explained this would not only give consumers more shipping options, but would also be environmentally sound and increase the safety of transportation by taking cars off the road.

Currently U.S. regulations prohibit Amazon from launching Prime Air, but that hasn”T stopped the company from taking its operations overseas. The company has development centers in the U.K., Austria and Israel. In addition, Amazon recently announced a partnership with the U.K. to test different operations such as beyond line of sight.

Going forward, Amazon anticipates it will be able to offer a family of operational vehicles.

Anil Nanduri, vice president of the new technology group and general manager of the UAV business at Intel, demonstrated how Intel’s experience and technology already made the company a perfect fit for drones. According to him, Intel already provides the processors, modems, wireless technology, platform storage, cloud storage and data center storage that are the key ingredients for drones. The company also provides RealSense technology to give drones visual intelligence.

“We consider drones actually as flying computers,” he said.

With these key ingredients, Intel has partnered with Yuneec to release the Typhoon H: a drone capable of detecting obstacles in flight and changing its flight path based on the obstacles. The company also recently released the Intel Aero platform for developers, the Intel Aero Ready to Fly Drone, and the Intel AscTec Falcon 8 for construction, inspection and agriculture.

In addition, the company is currently working on enabling drones to fly autonomously and beyond line of sight; developing a manned aviation drone copter; and enabling the ability for one pilot to manage and fly multiple drones.

But in order for Amazon to reach the ability to deliver drones, or for Intel to enable beyond line of sight and drone swarms, we have to change the way we think about the technology, according to Gregory McNeal, cofounder of AirMap, an airspace management solution for drones.

“Drones [are] simply the future of aviation,” he said. “We have only scratched the surface of what is possible.”

Instead of thinking about drones as an evolution of aviation, McNeal believes we should think about it as a revolution of aviation. He explained that in order to move the industry forward, we need to develop technology that allows drones to be autonomous and operate without human interaction.

Drones are doing more than transforming aviation; they are transforming technology such as the Internet of Things, artificial intelligence, blockchains, augment reality, and 3D technology, according to McNeal.

“Drones are the ultimate cross-cutting platform,” he said.

Drones need to be able to be aware, communicate, be in control, have entry onto a network, and provide scalable security. These are safety-enhancing ways drones of the future can deliver value at a high scale, McNeal explained.

“We will never be able to see a drone economy functioning at scale until we start to change our thinking,” he said.