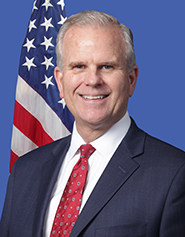 
NEW YORK ? May 7, 2018 ? Emerald Expositions announced today that Daniel K. Elwell, acting administrator of the Federal Aviation Administration, will give the Grand Opening Keynote address at InterDrone, September 5 at 10:00 am. He will be joined at InterDrone by a high-level lineup of commercial drone thought leaders who will frame the state of the industry at the conference, being held September 5?7 at the Rio Hotel in Las Vegas.

As acting administrator of the Federal Aviation Administration, Mr. Elwell is responsible for the safety and efficiency of the largest aerospace system in the world, overseeing a $16.4 billion-dollar budget, and over 47,000 employees. The FAA is responsible for setting the legal requirements for the use of commercial drones in the United States.

“We are thrilled to have the admin of the FAA do the Grand Opening Keynote at InterDrone for the third year in a row,” said Katie Flash, Content Director, InterDrone, adding, “The annual show is where the commercial drone space gathers and is a great platform to learn about each vertical in the industry.”

More information on InterDrone’strictly for commercial drone builders, buyers and flyers”Is at interdrone.com. For information on exhibiting or event sponsorships, please contact Brian Scott at brian.scott@emeraldexpo.com or 646.668.3784.

InterDrone is owned by Emerald Expositions, the largest operator of business-to-business trade shows in the United States, with many shows dating back several decades. Emerald currently operates more than 50 trade shows, including 31 of the top 250 trade shows in the country as ranked by TSNN, as well as numerous other events, connecting over 500,000 global attendees and exhibitors and occupying more than 6.9 million NSF of exhibition space.